The Leading Source Of Lifestyle

The Black Rose Succulent | All You Need to Know

When grown properly, it can bring fairy tale magic to your home or garden by transforming into an enchanted tree of beautiful burgundy roses.

Aeonium Arboreum ‘Zwartkop’ (Black Rose) is one of the most striking plants in the succulent family. If you have chosen to carry this lovely plant into your home, you will need to learn some tips to ensure proper care for your lovely succulent.

This plant can be defined as a Dark Knight in the backyard when illuminated by moonlight, as it adds tremendous suspense with its striking appearance. It has intricately layered, dark stubby rosettes that sprout at the tips of bare branches like Gothic pinwheels.

The Black Rose is a big, airy shrub that looks artificially perfect in a single whimsical planter while commanding attention when clustered in masses. With just a few simple requirements and a few grooming tips, the Black Rose succulent will easily become the center of attention wherever it resides. 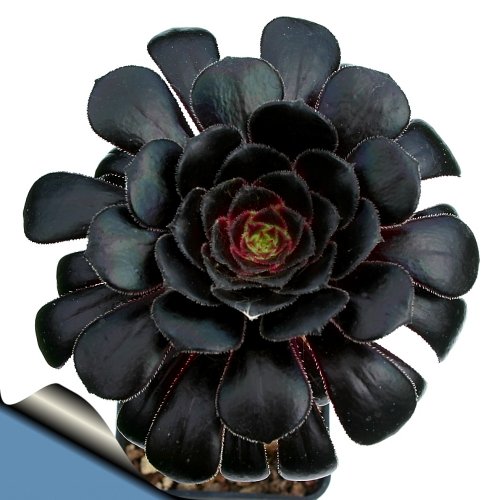 The Story Behind The Black Rose Succulent

This succulent’s genus name (Aeonium) is derived from the ancient Greek word “aionos,” which means “ageless,” and refers to the Dark Rose succulent’s youthful properties. This evergreen belongs to the Crassulaceae family of subtropical plants and is a common horticultural succulent.

The Canary Islands have been the Black Rose succulent’s natural habitat, focusing on Tenerife, El Hierro, Gran Canaria, La Palma, and La Gomera. The succulent has been found in North Africa, from Madeira, Morocco’s western coast, across Ethiopia, ‘s the Semien Mountains, and all the way down to East Africa. Between the 8th and 6th centuries BC introduced the Greco-Roman world to the Black Rose along the Mediterranean Sea. Succulents have recently been grown in California and the Iberian Peninsula in South Western Europe.

The Dutch name ‘Zwartkop’ was registered in the Abbey Gardens catalogs starting in the early 1980s. It also goes by the German word ‘Schwarzkopf,’ which translates to ‘Black Head.’ While it is unclear if the plant originated in Holland or Germany, it is accepted that its seedling was raised in Europe and introduced to the United States by the UC Berkeley Botanic Garden.

In 1993, this cultivar received the Royal Horticultural Society Award of Garden Merit.

The Black Rose Succulent Stands Out In a Crowd.

Aeonium Black Rose grows up to 3 feet (90 cm) long, with smooth curving stems and chunky rosettes of dark burgundy leaves. The succulent grows in clumps of bare, gray-brown stems meticulously arranged and begin branching from the plant’s base.

Large terminal rosettes with thick, waxy pointed leaves grow from the stems’ tips and can spread to a diameter of 6 to 8 inches (15.24 to 20.32 cm). These succulents enjoy the sun and the cold, with leaves that turn a dark, almost black hue in the sun and a reddish-purple tint with a green base.

Aeoniums are monocarpic species, which means that the rosette can only bloom once and then die. However, flowering does not occur every year, and not all rosettes bloom at the same time so that you can be confident of long-term plant life.

Whereas most succulents are low-maintenance, the Black Rose Zwartkop needs some care. This plant is particular about its soil needs and water requirements, making it a one-of-a-kind succulent.

You can also grow Aeonium Arboreum ‘Zwartkop’ indoors, but you must meet indoor growing criteria.

If you’re growing them indoors, place the pot near the brightest window to ensure the plant gets plenty of light.

Furthermore, avoid overwatering them and plant them in well-draining soil while growing them indoors. Read about the outdoor growing requirements for Aeonium Arboreum ‘Zwartkop’ in the following segment.

Let There Be Light All Around The Black Rose Succulent

These succulents need a lot of light to survive when it comes to Aeonium Arboreum ‘Zwartkop’ caring. This is why these chubby succulents grow outdoors, even in cold weather.

The Black Rose is a sun worshiper, choosing to spend at least 6 hours in partial shade to full sun. To allow the plant to acclimate without getting sunburned on the leaves, it should be gradually exposed to intense sunlight. Mature plants can withstand full sun exposure better than younger, less developed plants.

This aeonium succulent doesn’t mind being indoors as long as it’s perched in the house’s brightest part. During the warmer months, it would enjoy the chance to spend some time outside. If you cannot relocate the plant, you should consider purchasing a grow light.

Unlike other succulents, the Aeonium Black Rose will not thrive in cacti and succulent potting mix. They need well-draining soil that is mildly or moderately acidic or neutral, with a light composition and pH range of approximately 5.6 to 7.3.

This succulent can thrive in a mixture of cactus potting mix and perlite, with a bit of peat moss added to increase the soil’s porosity.

While most succulents are drought-tolerant, must water them according to the environment in which they grow. It is also affected by the humidity and weather in your area. E.g., if you live in an arid environment, you will need to water your chubby succulents more frequently.

During the summer, when temperatures are high, you can water your Aeonium Arboreum ‘Zwartkop’ every seven days. However, when the weather cools down, water them every 12 days, particularly if you have placed the plant outside. Conversely, if you live in a humid climate, you would not need to water them as often.

Similarly, if you have high humidity levels inside, your succulents’ water needs would be different. It is preferable to rely primarily on rainwater during the winter and avoid watering succulents more frequently. Water your Aeonium Arboreum ‘Zwartkop’ once every three weeks if your region does not receive any rain during the winter.

Stem cuttings are the most convenient way to propagate the Black Rose succulent. Since the clipping has the same characteristics as the mother plant, you may make exact duplicates. Cutting a stem, allowing it to dry, dip it in rooting hormone, allowing the stem to seal or callous, and eventually placing it in well-draining potting soil is an easy way to propagate the Black Rose. This approach is also applicable to rosettes.

Threats To The Black Rose Succulent

Overwatering is the most dangerous threat to any Black Rose succulent owner. Because of their small and shallow root system, these succulents are prone to drowning.

While aeoniums are usually pest-free, aphids and mealybugs enjoy munching on the stems and leaves. If you see a line of ants moving around your plant or a white, cotton-like material on the leaves, it’s a sure sign that your succulent is infected. Can solve your bug problem with a good squirt of insecticidal soap or neem oil.

The exceptional Aeonium Black Rose will add an exquisite buzz and beauty as a backdrop plant in a rock garden or as a vibrant show on a sunny windowsill if you’re looking for a succulent that will turn heads.

Adding another lovely succulent to your garden sounds exciting, but bear in mind that the plant requires proper care to grow healthy. By following the instructions outlined above, you will ensure that your Aeonium Arboreum ‘Zwartkop’ (Black Rose) grows happy and healthy.

Aeonium Black Rose can tolerate light frost but cannot tolerate freezing temperatures for extended periods of time. That means that if your Aeonium Arboreum ‘Zwartkop' is exposed to freezing temperatures, it will almost certainly not survive and will die soon. Even if kept outside during mild winters, the black rose will survive.

If you live in an area with harsh winters, you may need to protect your plant from freezing temperatures or frost. For this, carry your Aeonium Black Rose Arboreum indoors during the winter and grow it in containers. If you cannot move the plant due to its location in the ground, you can protect it with frost covers or frost cloths.

Best Clothes to Wear While Gardening

Which Succulents Can Be Planted And Grow Well Together

What succulents can be planted together is a common question. The answer is, If you

Backyard gardening can be exciting and enjoyable, but it can also be filthy. A good

This egg-shaped succulent has two gray-green leaves and a central cleft. New leaves sprout at

The leaves on this succulent are tightly packed around the stem. The stems of the

Living a happy and satisfying life is something that everyone needs to have, yet so many cannot feel it.
Learning to live life to the fullest is an excellent step towards seeking a direction that will bring you to the highest sense of happiness and achievement. We all need relaxation moments to relish in the sense of contentment, but remaining in one place for too long will leave you empty of life. Find out what makes your life meaningful and get it right.

How To Water Succulents: The Definitive Guide

This book is the only tool you’ll need to become a confident designer and caretaker of your very own beautiful, thriving, succulent garden!